Difference Between Four-Stroke and Two-Stroke Engines 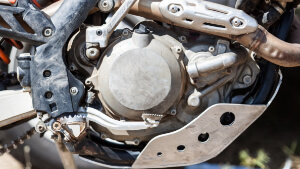 When it comes to dirt bikes, not all engines are created equal. In fact, the debate between two-stroke and four-stroke engines is one that has tormented riders for many years. You may be wondering which type of engine is best, but the truth is that there is no clear choice. Although these engines have similar components, they don't exactly work the same way. Choosing between two-stroke or four-stroke will ultimately come down to personal preference and riding style. In this guide, we explain the difference between four-stroke and two-stroke engines, so you make the right choice for you.

Difference Between Four-Stroke and Two-Stroke Engines

Whether you are an experienced rider or you are just starting out, it is important to understand the differences between each type of dirt bike engine. Some riders jump back and forth between the two platforms, while others remain extremely loyal to only one type. An engine stroke refers to the full travel of a piston along the cylinder, in either direction. In one full cycle, a two-stroke engine makes one trip up and down while a four-stroke engine makes two trips up and down.

Two-Stroke Engines: Two-stroke dirt bikes, also known as two-cycle motors, pingers, or strokers, have had a long and celebrated history in motocross. In a two-stroke process, it takes two sequences for the engine to function: compression and combustion. Once the engine fires, it ignites the spark plug for each revolution of the crankshaft, which makes a two-stroke dirt bike extremely lightweight in comparison to its four-stroke counterpart. Despite being simple in design, two-stroke engines do require more maintenance. Two-stroke dirt bikes are also faster and nimbler than four-stroke bikes, with an intense kick, but they can be difficult to control on jumps.

Four-Stroke Engines: Four-stroke dirt bikes, also known as four-cycle motors, four-bangers, or thumpers, make up the overwhelming majority of the modern motocross market. In a four-stroke process, it takes four sequences to burn fuel: intake, compression, combustion, and exhaust. Each sequence comprises one stroke. In the first stroke, the piston is pulled downward from the top of the cylinder to the bottom, reducing the pressure inside the cylinder. The piston then draws an air/fuel mixture into the cylinder through the intake port. With the exhaust and intake valves closed, the piston is then pulled back up to the top of the cylinder in the second stroke, compressing the air/fuel mixture. In the third stroke, the compressed air/fuel mixture is ignited by a spark and the pressure from combustion drives the piston back down with tremendous force. This stroke is the main source of engine power and torque. In the fourth and final stroke, the piston is pushed back upward and forces the burned exhaust gases from the cylinder out of the exhaust valve. The engine will only fire every two revolutions of a crankshaft, providing a steadier, more predictable power delivery in comparison to two-stroke bikes. Four-stroke engines also tend to have a smooth powerband, making a four-stroke bike easier to ride for beginners. Four-stroke dirt bikes might be heavier than two-stroke bikes, but they have better traction, less vibration, and a wider powerband.

How do Two-Stroke and Four-Stroke Dirt Bikes Compare?

Although the market has been divided in terms of two-stroke and four-stroke bikes, there are no hard and fast rules when it comes to deciding what type of engine is best. Power delivery is probably the biggest difference between these two engine types. While two-strokes take off with explosive power, four-strokes are significantly less intense and give riders a choice of how they want to ride. This feature gives four-stroke bikes a clear advantage in terms of hard pack conditions or situations where traction is necessary. In terms of handling, the added weight of a four-stroke bike will make any two-stroke bike feel very light and nimble. Although you may have to rebuild a two-stroke engine more often, the cost of replacing the many components in a complex four-stroke engine gives two-strokes an advantage in repairs.

Very few brands have been as persistent about maintaining a balance of two-stroke and four-stroke options than KTM. With two-strokes that excel in enduro competition and four-strokes that dominate motocross, KTM offers the widest and most comprehensive collection of off-road bikes for all sorts of riders. At KTM Parts Nation, we proudly supply a wide-ranging selection of KTM dirt bikes and would be happy to help you find a model that fits your needs. Please feel free to contact us with any questions about the difference between four-stroke and two-stroke engines.