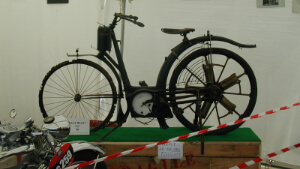 Although dirt biking now represents a billion-dollar industry, the history of dirt bikes can be traced back to more than a century ago. As with many inventions, the development of the dirt bike can be largely attributed to evolution. In fact, transportation improvements became a major focus in the 1800s and paved the way for the motorbikes we know today.

An American inventor named Sylvester Howard Roper built the first steam-cycle in 1867. His early designs featured a twist-grip handlebar mounted throttle before it was used on gasoline-powered cycles. Inventor L.D. Copeland went on to modify an "American Star" bicycle using steam propulsion in 1884. The problem with steam and external combustion engines was that they were too bulky and heavy to be used on light vehicles.

Practical internal combustion engines began appearing in the 1880s. It wasn't until 1885 that the first gasoline-powered motorcycle was invented. German inventors Gottlieb Daimler and Wilhelm Maybach built the Reitwagen, or the "Riding Car." Although the Reitwagen was much closer to a moped than a motorcycle, it undoubtedly inspired some attributes of the modern-day dirt bike we know today. Daimler designed a single-cylinder engine to address the problem of size and weight, because his first motorbike was primarily made of wood with metal rimmed wheels.

In 1892, inventor Félix Théodore Millet designed a motorbike that used a five-cylinder rotary engine with the crankshaft as the hub of its rear wheel. However, the first commercially successful motorcycle may not have been invented until 1894. Hildebrand and Wolfmüller of Germany designed a two-cylinder engine with connecting rods attached directly to the rear wheel and were also the first to refer to this motorized, two-wheeled vehicle as a "motorcycle." The very first motorcycle produced in the United States was built in 1896 by Roy C. Marks, founder of the California Motor Company. This first American-made motorized bike was inspired by the engine and mechanics of the French-made DeDion Bouton, whose tricycle was one of the most commercially successful motor vehicles in Europe from 1897 to 1901.

Leading Up to the Depression

After emigrating from Sweden to the United States, Oscar Hedstrom began producing high-quality bicycles out of his home shop. Before long, he began producing gasoline engines to power tandem bicycles that were used to pace bicycle races. Pacers such as these were designed to split wind for bicyclists who rode in their draft. He then introduced his pacers to former bicycle racing champion George Hendee, who asked Hedstrom to build a prototype of a motorized bicycle for mass production. Hedstrom and Hendee went on to create the Indian Motorcycle Company in 1901.

Just two years later, William S. Harvey and Arthur Davidson designed the first production Harley-Davidson motorcycle, which was a single-cylinder racing bike that displaced 27 cubic inches. In 1903, aviator Glenn Curtis designed the first V-Twin motorcycle and went on to build a 4400cc V8 motorcycle in 1907, setting a land-speed record of over 126 mph. Indian made their first motorcycle with a V-Twin engine in 1906 and Harley Davidson followed suit in 1909.

At this time, motorsports grew in popularity. The first true motorcycle race began with the Paris-Vienna race in 1902. Then in 1905, the Fédération Internationale de Motocyclisme (FIM) created an international cup in Dourdan, France between five nations: Austria, Britain, Denmark, France, and Germany. Starting in 1907, the Isle of Man Tourist Trophy (TT) would go on to become the most famous event in all of Europe. Harley Davidson enjoyed at least seven different first place finishes at endurance contests and hill climbs across America. In 1911, the Indian factory team took the first three places at the Tourist Trophy.

Although Siegfried Bettman began selling bicycles and established the Triumph Cycle Company in 1886, he didn't start making motorcycles until the turn of the century. He modified existing motorcycle models to create what bears a very strong resemblance to the dirt bikes we know today. Bettman's dirt bike was more of a dirt motorcycle in the true sense of the word in comparison to the motorized Reitwagen made by Daimler and Maybach.

Over the next few decades, most of the earliest dirt bikes were essentially modified street bikes. It wasn't until the 1940s, 1950s, and 1960s that dirt bikes began to take on their own distinct designs. Japanese manufacturers Suzuki, Yamaha, Honda, and Kawasaki all began mass-producing two-stroke motorbikes that could be driven on trails and in campgrounds, paving the way for the motocross market as we know it today.

In 1951, Austrian engineer Hans Trunkenpolz designed his first prototype – the R100. Within the next few years, the business was named Kronreif and Trunkenpolz Mattighofen (KTM). Having secured its first racing titles and making its first appearance at the International Six Days Trial, KTM quickly demonstrated its dominance over the enduro scene. KTM dirt bikes are also consistently the lightest or among the lightest in their class.

In the decades that followed, dirt biking earned a loyal following of riders in enduro, motocross, supercross, and trials. Four-stroke dirt bikes quickly replaced two-stroke dirt bikes. However, KTM has been persistent about maintaining a balance of two-stroke and four-stroke options for competitive riders. Today, the industry-leading brand offers the widest and most comprehensive collection of off-road bikes.